Bas van Houte was born in Schiedam. He studied at the Rotterdams Conservatorium the majors organ (at Jet Dubbeldam and Arie J. Keijzer) and choir-conducting (at Barend Schuurman). During this study, he attended an interpretation course for old Italian organ music, the Kurt Thomas (summer) course (conductor course) and won the organ concourse in Gorinchem. After studying at the Conservatory, Bas van Houte studied AMV / School music at the Schumann academy. Diploma (2nd degree) via the foundation Stichting Nederlandse Vakdiploma Muziek.

Bas van Houte is employed at the PENTA college CSG Scala Rietvelden in Spijkenisse, as a teacher (final exam subject) music and cultural history. In addition to teaching music, he is also a team leader and is therefore part of the school’s board. He introduced the final exam subject music at the school as well as the concerts in the breaks by upper students.

As conductor, he is employed at the Oratorium Choir ‘Zuid-West-Nederland’ in Middelharnis. As organist / conductor, Bas van Houte is employed in the Basilica of the H.Liduina and O.L.V. Rozenkrans in Schiedam. With the women’s choir ‘Jubilatio’ and the ‘In Honorem Dei’ men’s choir, he carries out the eucharist celebrations with multi-vocal Latin masses, Gregorian hymns and motets. In addition, he is an artistic director and conductor of several projects, including the annual performance of the Matthäus Passion of J.S.Bach with the Schiedams Bachkoor in the Great or St. Janskerk in Schiedam.

From 2011, Bas van Houte provides the cantat services in Vlaardingen with the Vocaal Ensemble Basiliek Schiedam in collaboration with the West-Nederlands Bachorkest. From 2015 onwards, in the Bethel church under the foundation Stichting Cantates Vlaardingen. 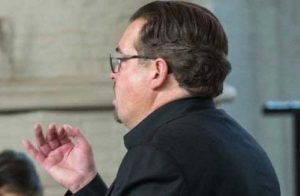