The St. Liduina Basilica in restoration

On September 5, 1999, the Basilica of the H. Liduina was consecrated ceremonially after a thorough restoration of almost five years. The Liduina Basilica, a neo-Gothic cross-basilica dating back to 1879 -81, is characteristic of the oeuvre of the architect E.J. Margry from whose studio (Snickers and Margry) also comes the interior. From the outside, the church looks sober. The brick facades are interspersed with different types of natural stone, whose water-breathers and finials are the most decorative. The interior with a virtually fully preserved neo-gothic inventory is all the more exuberant. The masonry walls and vaults are painted with floral motifs. The natural stone cross-ribs rest on marble columns, alternated with bundle pillars at the place of celebration. The stained-glass windows with motifs related to the New Testament and the life of Maria and Liduina come from the studio of Capronnier (Brussels) and Chamini (Hasselt).

More and more cracks
In 1988, the architectural state of the church was so bad that it was instructed to make a restoration plan. The walls and vaults showed cracking and also the natural stone was poor. Parts of the window tracing of Savonnières (limestone) came loose. In the church, a net had to be hanged in order to maintain church-services and the large rose-window had to be taken out. Cracks in the natural stone vaults required the municipality in 1993 to even eradicate parts of the church. From 1988 onwards, it was tried to enable restoration through various subsidy schemes, but without success. Giving up was not an option and fallen down stones yielded sufficient material for the pastor and the parish-government to bring the minister’s and the government architect’s attention to the need of the church. In the meantime, the municipal council developed a large-scale new construction project at the foot of the church. A plan that would miss a lot of its allure if the church no longer existed. Employment related to the construction of both the new building project and restoration was a reason for the Ministry of the Interior to make budget available for the restoration of the church in the context of the employment impulse 1994. Thereafter, contributions also became available from the ministry of OC & W, the municipality, the diocese and the province. 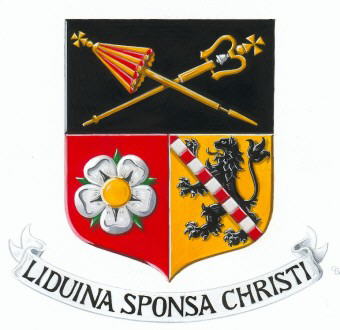 Finally restoration
Striking the first new pole on September 19, 1994 was the start of the restoration. The church was founded on wooden poles. These became partially dry, causing the foundation wood to be affected. Given the extent of the rotting process related to the sinking process, this could not be the main cause. In the 19th century, one had no opportunity to carry out a survey of the ground’s load capacity. From the original specifications it was found that pinewood poles of 11 meters in length were used, while from nearby probings is is known that the course of the solid layer is very erratic and sometimes more than 20 meters deep. The foundation problem was thus mainly due to the sinking of the wooden pole foundation. In order to maintain the church, a new foundation had to be realized. In total, 312 steel pipes replace the 960 old wooden poles. The foundation recovery became critical when the steel pipes at the southern transept caused problems with the existing foundations, and another pile-system had to be chosen. After the foundation restoration was completed, the restoration of the church itself could begin in August 1996, such as repairing of tears in the vaults and walls and restoring the stained glass windows. Unfortunately, rusting bridge rods had affected the traces of choir and nave so that they were torn over the whole height and had to be replaced in their entirety.
Even before the restoration, the many wall and vault paintings were impressive, but during restoration it was found that these were originally much more exuberant and were probably partly painted for maintenance reasons. Now that the stained glass windows and the paintings have been stripped of the soot and dust of the last century and restored, the interior of the church is a pleasure for the eye. Contributing to this is also the new tile floor replaces a later floor of Solnhofer stone. Remains of the original floor are still in the baptistery. Because the interior of the church on the floor is still virtually intact, a reconstruction of the old floor was obvious. Similar tiles appeared to be produced in England still. However, the interior is also adapted to the changed use. In addition to the existing high altar, a new liturgical center has been created. In the baptismal chapel, the worship of H. Liduina has been given a special place and here is also the Gothic tombstone from the St. Janskerk. The Tourist Office has since established a Liduina day trip through all the places in Schiedam that played a role in Liduina’s life. These include both the Great or St. Jan’s Church and the Liduina Basilica. 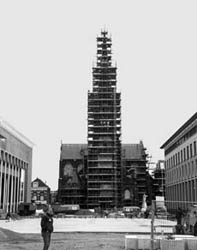